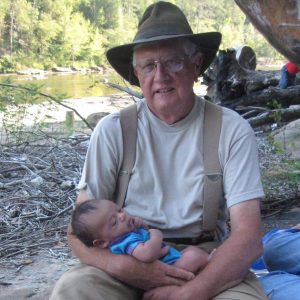 In future issues of The Voice, I hope you will join me as we travel back in time to places that no longer exist and become acquainted with people you may not have known or heard about. It has been said that the future is but a dark corridor, through which we see dimly from light coming from behind. There is a lot of truth in that. So, let us turn up our wicks, lift high our lamps, and venture forth into this corridor that leads us to the McCreary County of yesteryear. I think it will be a fun journey.

More than twenty years ago, when The Voice was in its infancy, the editor of the newspaper at that time, Dr. Bob Gatton, asked that I contribute a column to the paper. The Voice had been established by the Stephens family who believed that McCreary Countians needed an alternative to the one existing at the time. It was billed as “the people’s paper,” and that it actually became and continues to be. Dr. Gatton had worked in the school system long enough to understand that McCreary Countians are a unique and wonderful people, full of contradictions and unfulfilled potential, but rich in compassion and common sense. He also understood that in order for a people, any people, to know where they are going, they have to know where they have been. He believed that The Voice could serve as a medium for accomplishing both the remembrance and the understanding, but he needed help in getting the message out. For whatever reason, he thought that I could do the job with a newspaper column. Although I agreed, totally, with his assessment of McCreary Countians, I had little confidence in his assessment of me. Nevertheless, I agreed to give it a try.  Thus, began a series of Following Trails Grown Dim contributions to The Voice that ended when family obligations and other writing endeavors forced me to call it quits.

Now, a new editor of The Voice has asked that I revive the old Following Trails Grown Dim column. I have agreed to do so, although on an as-needed basis. So, don’t expect to see my column in the paper every week. At my age, I find that deadlines just don’t agree with me, anymore.

A new generation of readers of The Voice has reached maturity since I discontinued my column. They are masters of the electronic media and skilled in the use of mass communication, yet they sometimes seem to be losing their sense of place, not knowing who they are or where they come from. This is not uncommon in rural areas when cell towers are erected and fiber-optic lines are lifted over cornfields and pasture lands and threaded through stands of maple and red oak to homes previously accessible only by four-wheel drive vehicles. Facebook and Twitter have replaced Sunday afternoons with Grandpa and Grandma on the front porch. Live-streamed church services have made it possible to “go to church,” in our pajamas instead of sitting in a cramped pew with people we may not, necessarily, care to be around. Like everything else in the world, both good and bad co-exist in this new lifestyle that has come to us, so we must take care not to let the latter overpower the former. It is my hope that Following Trails Grown Dim will help readers of The Voice come to a better understanding of what took place in their homeland in the years prior to their emergence onto it. Some of the column will be recycled material; some will be new.  All will serve, hopefully, to drive home the point that we, truly, are a unique and wonderful people.

William Goodell Frost was president of Berea College from 1892 to 1920. In one of his speeches, he referred to the people of Eastern Kentucky as America’s contemporary ancestors.  By that, he meant that he saw the Kentucky mountaineer as possessing many of the cultural values and personality quirks of an America that had ceased to exist elsewhere. And, Frost’s views were widely accepted at the time.

In recent years, however, Frost has been severely taken to task by Kentuckians seeking to promote the notion that folks living in the mountainous portion of the Commonwealth are just like everybody else.  And for the most part, they are right. A drive through downtown Harlan or Whitesburg is little different from a drive through any small town in Kansas or New Jersey.  Even our own little Whitley City is rapidly becoming part of what has been called the great homogenization of America.

But, I got to thinking. What if Frost, in spite of his critics, happened to be right? I am old enough to remember watching my grandfather pull wood ashes over a bank log in his fireplace so he wouldn’t have to kindle a new fire in the morning. After all, matches were expensive and needed to light the kerosene lamp when he and Grandma sat at table before dawn. I walked many times with my grandmother, through a laurel thicket and on a path slickened by wet leaves, to an open spring at the head of Mulberry Creek to help her carry buckets of drinking water back to the house. Good water was hard to come by and not a drop was to be wasted. Even into my high school years, trips to an outdoor privy were a daily occurrence. Everybody used a privy, even those at the top of the social pyramid, and everybody had the same complaint; the privy was too close in the summertime and too far away in the winter. Social Security was for old people who could no longer provide for themselves, not able bodied young men who were fully capable of slinging coal or felling old growth hemlocks with double bitted axes and crosscut saws. In 1945, when I was six years old, I think I could have claimed that I lived among America’s contemporary ancestors and I am pretty sure I would not have been too far off the mark.

So, it goes without saying that I appreciate the efforts of a small band of men who organized the South Kentucky Rural Electric Cooperative, bringing instant light to the darkest of rooms and heat at the turn of a thermostat. I honor the memory of Arthur W. Holmes, the father of McCreary County’s modern water system, each time I turn on the hot water and step under my shower head after a day of labor among my pole beans, okra, and butternut squash. The ancient privy at my old homeplace still stands. It’s a great place to store my yard tools now, but I shudder at the thought of having to use it again for its intended purpose. And, I, certainly, hold no resentment toward anyone for whom misfortune in life has legitimately forced him or her onto the public dole.

Many of these benefits of modernity have come with a price, however. The ability we have to light up a room with the flip of a switch has made us forget how to live in darkness. The steaming water from our faucets has turned the tea kettle into a curiosity found in antique stores. Central air has resulted in the removal of front porches from our homes. Indoor toilets that send  gallons of treated water down the drain with the turn of a lever have made us forget how precious that natural resource is to our pampered life. Worst of all, the search by young people to find an excuse to get a government check every month has weakened us and left us vulnerable to outside forces who do not have our best interests at heart. This is a dangerous trend, one that must be averted if we are to remain a unique and wonderful people. People like my parents and grandparents bequeathed to us this marvelous lifestyle we enjoy today, but we must not take it for granted and become too accustomed to it. Our forefathers and mothers were independent and self-reliant and they endured privations we cannot imagine. Some were flawed individuals, to be sure, and we must take care to avoid duplicating their mistakes. The others, though, have much to teach us. Let us lend an attentive ear.