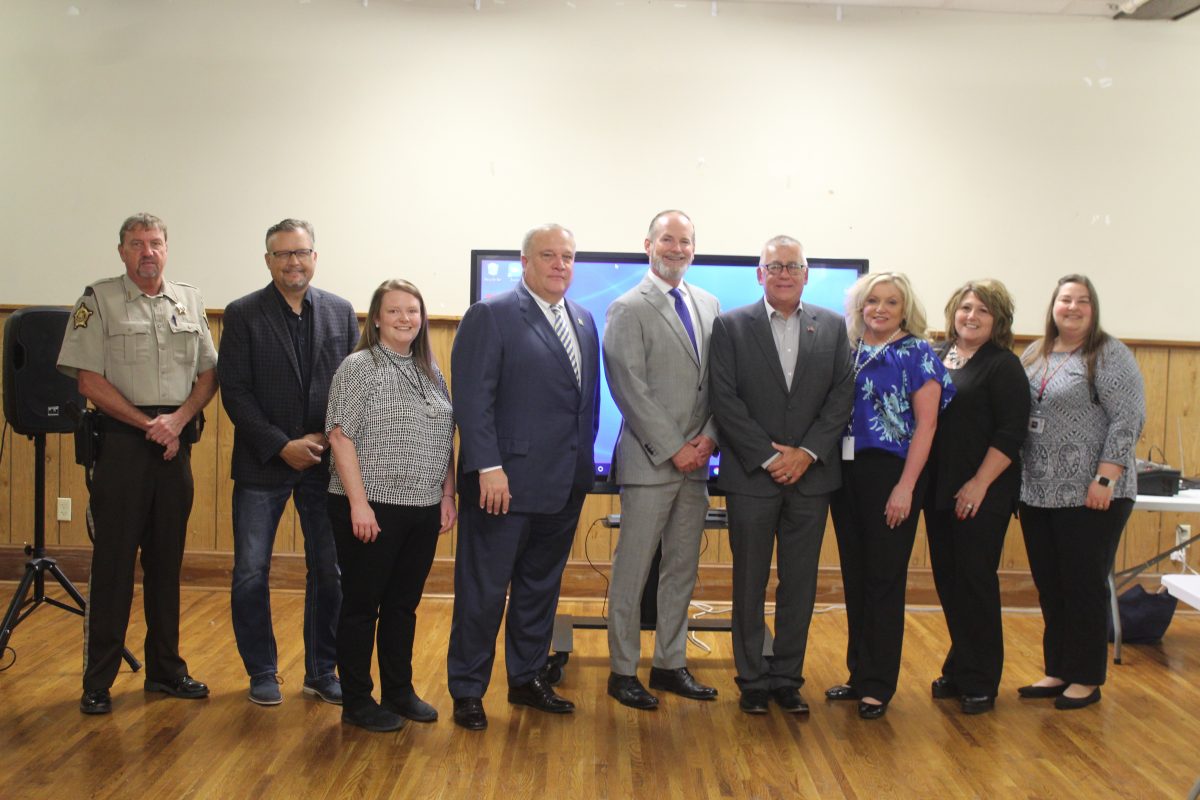 On Wednesday (9-21-22), Kentucky’s 25th State Senate District Senator, Robert Stivers (Republican), visited McCreary County for the first time since being named McCreary County’s Senator due to mandated redistricting of Kentucky’s state senatorial districts.  Prior to redistricting, State Senator Max Wise was elected and served as McCreary County’s state senator in Kentucky’s 16th District.  During the redistricting, McCreary County was removed from the 16th Senatorial District and placed into Senator Stiver’s 25th District.
The State Senator (who also serves as Senate President) visited McCreary County to attend the McCreary County Chamber of Commerce Luncheon and Town Hall.  He also met with local officials concerning the timeline for scheduled construction of a separate entry/exit road at McCreary Central High School/McCreary County Middle School.
During the luncheon/town hall, KY Senator Stivers shared details of his personal background and experiences as a KY State Senator.  Describing himself as “another generation of a clan who got the political bug,” Senator Stivers noted that he comes from a long family line of politicians and elected officials.
Hailing from Manchester, KY in Clay County, Senator Stivers said McCreary County is similar to much of the rest of his current district, including Clay, Jackson, Knox, Owsley, and Whitley Counties.  Senator Stivers was elected to the Senate in 1997 and became Senate President in 2013.  As Senate President, Senator Stivers is the third person in the line of succession for the Governorship and receives special state briefings similar to that of the Governor.
Senator Stivers said Kentucky is in a very good position economically since members of the House and Senate have worked together to get the state’s budget under control.  In order to move forward, Senator Stivers stressed the importance of investing in education, technology, and infrastructure. Sharing that his own daughters were forced to leave their homes in Clay County in order to find employment in their chosen careers, Senator Strivers noted that investment in infrastructure must include investment in intellectual infrastructure by ensuring young people can find employment in the 25th District.
Senator Stivers also discussed the need to push a state tax code that competes, not only regionally, but nationally and internationally as well.  According to Stivers, continuing to phase out Kentucky’s personal income tax will make Kentucky more economically competitive with other states.  With the phasing out of personal income tax, Kentuckians gradually pick up increased sales tax based on consumption, similar to the tax code in Tennessee.  According to Senator Stivers, this gives taxpayers more control over the amount of taxes they pay.
As a recently appointed senator to McCreary County, Senator Stivers plans to learn about the county.
“I want to listen,” Stivers remarked.  “I want to understand McCreary County.  I plan to spend the next few months learning about the County.”
Senator Stivers took several questions from those attending the luncheon/town hall.
In response to The Voice’s question regarding the Senator’s thoughts on improving economic and employment opportunities for those (particularly young people) in McCreary County, Senator Stivers replied.
“Tourism is one bullet,” Stivers remarked.
He described his trip into McCreary County via HWY 92 as being very scenic and said he imagined how beautiful the route will be during the fall.
“What’s the difference in us and Gatlinburg?” Senator Stivers quizzed.  “We’re in the same mountain range with the same colorful leaves.”
Senator Stivers stressed the importance of thinking about tourism regionally in order to draw a maximum number of visitors to the area.
Additionally, Senator Stivers said it is important to complete roads to lower transportation costs, making the area more accessible to economic development.   He reiterated his push to create intellectual capital by emphasizing the need for local career and/or technical training.
“Locals have to look at themselves and ask what they can do with their partners to make things better,” Senator Stivers noted.
Fibrotex and Outdoor Venture’s Ray Moncrief asked the Senator what can be done to help motivate individuals to reenter the workforce.
“We have incentivized people to stay home instead of incentivizing them to work,” Stivers declared.  The Senator said one barrier to overcome for those entering or reentering the workforce is the lack of child care, especially for women.
“I’m not in favor of all day pre-school,” the Senator said.  “That doesn’t help people working 2nd/3rd shifts and holidays.”
Senator Stivers also recognized the drug problem in District 25.
“We’ve got a problem with drugs,” Stivers declared.  “We’ve got to find out who the monetary people are (drug traffickers) and put them away.”
During his visit to McCreary County, Senator Stivers also meet with local leaders including Judge Greene and School Superintendent Gunn.
Posted in Latest News