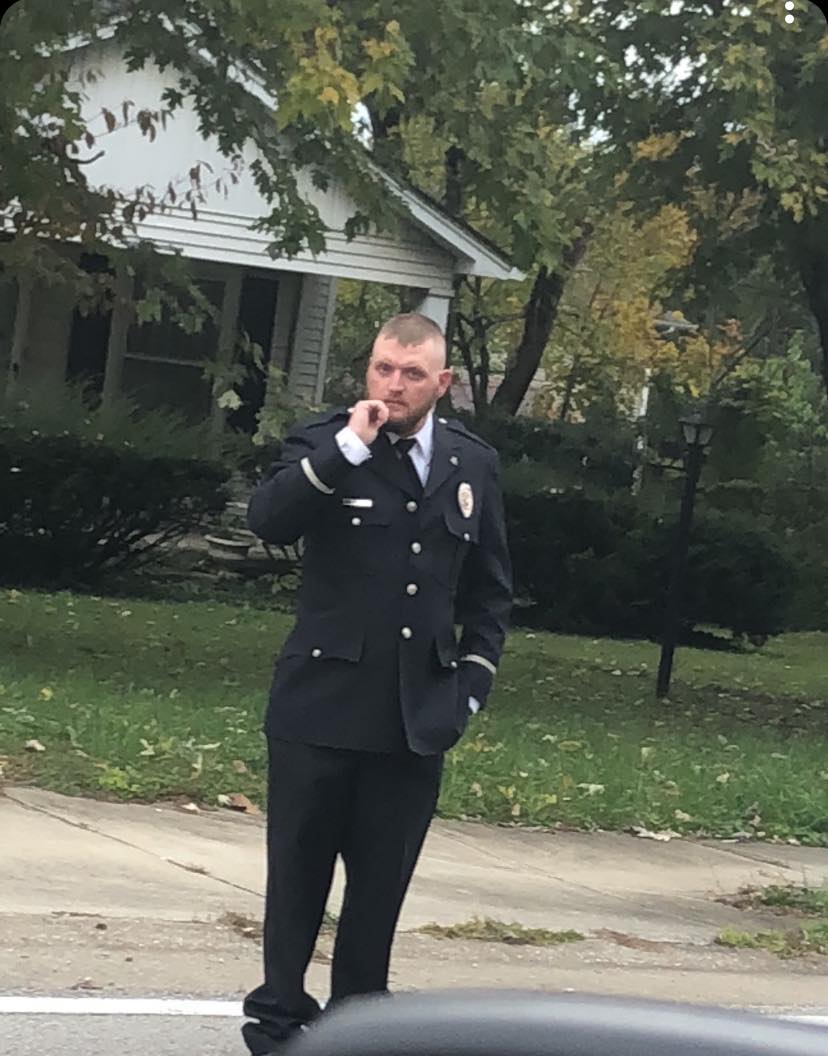 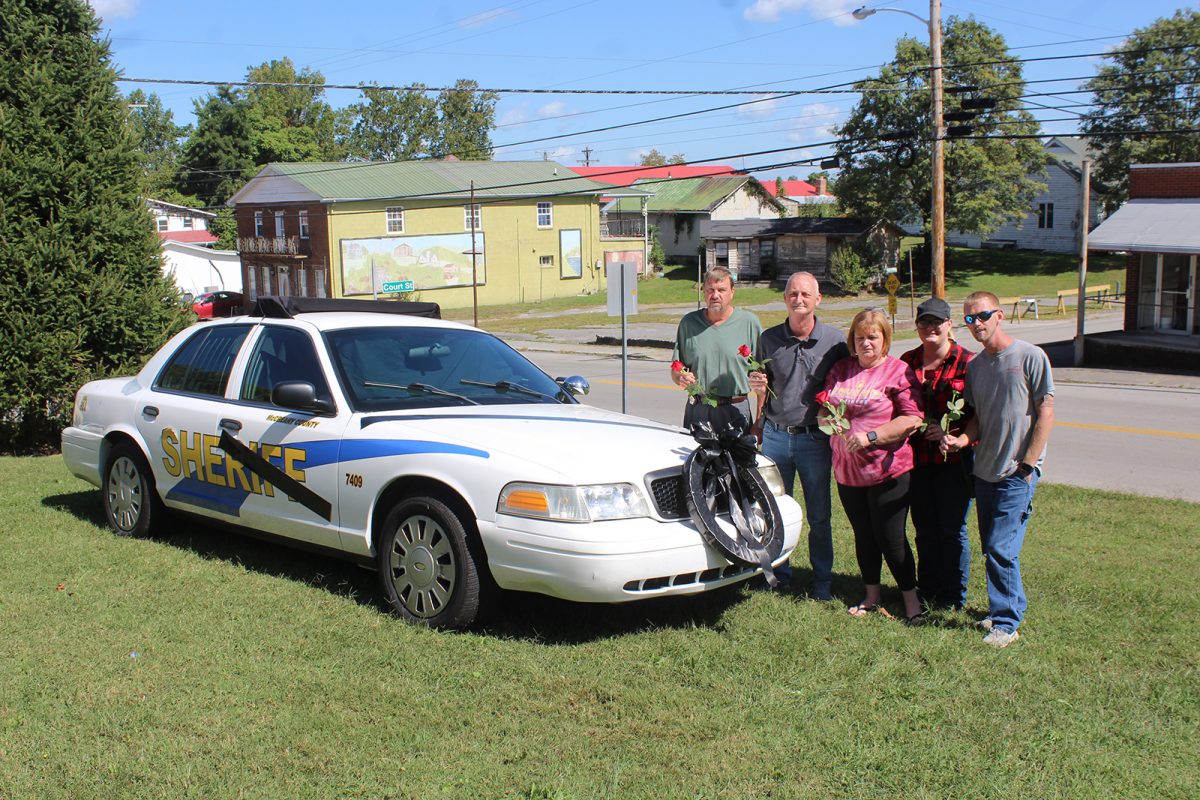 Photo by Eugenia Jones Josh Goodin’s family is pictured with McCreary County Sheriff Randy Waters as they prepare to lay roses on Josh’s blacked out police cruiser, 7409.   Pictured left to right are:  Sheriff Randy Waters, Craig and Donna Goodin (parents) and siblings, Lindsey and Craig.  Cards of sympathy can be left at Josh’s police car which is parked on the front lawn of the McCreary County Courthouse.

After winning his first fight against cancer and then waging a second courageous battle against terminal cancer, McCreary County lost one of its finest when the end of watch came early on Saturday morning (9-24-22) for North McCreary County Fire Department Assistant Chief and McCreary County Sheriff’s Office Special Deputy, Josh Goodin.
Loved throughout McCreary County and beyond, the 32-year Goodin is lovingly remembered with words and phrases such as “wonderful father,” “selfless,” “devoted his life to others,” “served his community and county well,” “great person,” “devoted,”  “always eager to help someone in need,” “never met a stranger,” “friend,” “family,”  “jokester,”  “courageous,” and “huge heart.”
Serving as Assistant Chief of North McCreary County Volunteer Fire Department and as a Special Deputy (Badge # 7409) with the McCreary County Sheriff’s Office until his passing, Josh began formally serving his community at a young age.  He joined the Eagle/Sawyer Volunteer Fire Department as a junior firefighter at the age of 14 and signed on as a firefighter with the North McCreary County Fire Department at the age of eighteen.  Josh was on the McCrearyFest Board and had served as a deputy jailer in the past.
McCreary County Sheriff’s Deputy Dustin Ridner considered Josh a “brother” both professionally and personally.
“Josh was a friend to everyone and found joy in helping others,” Ridner said of his friend.  “Josh, for sure, had a servant’s heart.  He treated my family like his own, and I could always count on him no matter what.  I never had a biological brother, but because of Josh, I will never have to wonder what having a brother is like.  He sure will be missed by all who knew him.  Our community lost a good one.  I will forever cherish the memories we made.  Godspeed, Brother.”
McCreary County Tourism Director, Michelle Perry, also spoke of her friendship with Josh.
“When I hear the name, “Josh Goodin,” it is hard not to think of the countless hours he gave to his community,” Perry reflected.  “But Josh was more than a servant to the community.  He was a silly smirk, a jokester, a proud dad, a kind heart, stubborn to the core, an ear always willing to listen, and never more than a phone call, text, or Snapchat away.  Josh was someone I proudly called a friend-a friend I quickly learned I could always rely on.  If he told you he would do something, he did it.  Even during his bad days, Josh kept his sense of humor, and that comforted my heart on many hard days.  Josh never let fear overshadow him, and I admire the brave fight he fought.  Our loss is truly immeasurable just like the impact he left behind.”
Perry, who served on the McCrearyFest Board alongside Josh, noted this year’s McCrearyFest Parade will honor Josh by recognizing him as Grand Marshall of the parade.  Josh’s police cruiser and a fire truck from both North McCreary County and Eagle/Sawyer Fire Departments will be blacked out and lead the McCrearyFest parade down Main Street.  When Josh’s police cruiser reaches the stage in front of the courthouse, a special tribute will be given in his honor.
North McCreary Volunteer Fire Department Chief Tim Perry recalled Josh, as a youngster still in diapers, visiting the Eagle/Sawyer Fire Department.
“I knew Josh all of his life,” Chief Perry said emotionally.  “I’ve been with him since he was a baby.  Josh Goodin was just like my own kid.  He grew up to be a great man and father.  He was a fine firefighter.  He was a great guy.  I love and miss him.  This is one of the hardest things I’ve ever had to do in my life.  It’s going to be tough.”
McCreary County Sheriff Randy Waters spoke of Josh’s desire to help others and his dream of becoming a sheriff’s deputy.
“I am humbled to have known Josh Goodin,” Sheriff Waters remarked.  “Not only did I gain a brother in law enforcement, but I gained a brother, friend, and an extended family member.  Josh was one of those men who did everything you asked of him and never complained about it.  When Josh became a deputy, he smiled from ear to ear and kept telling me that becoming a deputy was one of his dreams.  Josh fought a brave battle with cancer.  God rest his soul.  I loved him.”
Josh is survived by many family members and friends, including his young daughter, Paisley. All are invited to attend the McCrearyFest parade (noon) where Josh’s cruiser and fire trucks (as Grand Marshall) will lead to a county-wide tribute to Josh in front of the McCreary County Courthouse at approximately 1:00 p.m. on Saturday, October 1.  Funeral services will be held at 1pm Sunday, October 2, 2022 at the McCreary Central High School. The family will receive friends after 5pm Saturday, October 1, 2022 at the High School.
During this sad time, those of us at The Voice and all of Josh Goodin’s family and friends lovingly say, “Rest easy, 7409.  Thank you, sir, for a life well-lived.”
Posted in Latest News